In many Merovingian graves, glass vessels can be found. Why were these placed into the
grave? Are they for drinking, during a funerary feast? Or do they serve another function?
Or multiple functions? One way to try and answer this question, is to carry out an
archaeological experiment. This meant that a number of Merovingian glass vessels needed to be
replicated. Together with the Nationaal Glasmuseum Leerdam and historical glassblower
Marc Barreda, we organised a (corona-proof) glass blowing day. It was very interesting
to see what techniques are applied to make these glass vessels, and the results are
stunning as well!

The actual experiment was very insightful. We discovered that in principle, all replicated
glass vessels could function as lamps. Considering lighting patterns, some work better
than others. Especially the vertically ribbed glass vessels emitted bright and clear “sunlike”
patterns. Another, perhaps even the most interesting, find is that these small glass
vessels work especially well as lamps when hung low above the ground. This is when
lighting patterns are most clearly cast onto the ground. One can imagine that such usage
is especially relevant in the context of a grave lamp, or votive lamp, hung as a visual
reminder of the deceased at its grave.

Photographs by Yvonne Bekkers and Erik Rijper.
Reference: Van Winkelhoff, A.M., 2021. Light in the Dark Ages: a conceptual approach to
the role of glass vessels in the Merovingian burial rite. RMA-thesis Universiteit Leiden.

The experiment in photos:

This blog post will share some of the first preliminary results from the ‘attestation’ database. Although the Rural Riches database is primarily an archaeological database, we decided to also include evidence from written sources. Textual evidence often provides important topographical information, for example on towns, cult places and rural estates, which can help interpret the archaeological evidence. But texts also offer the possibility to trace the whereabouts of elite individuals, such as the Merovingian kings, so that we can investigate the extent to which elites were present in our research area.

As a part of the sub-project ‘Towns and Elites’, Jip Barreveld has been mapping the itineraries of Merovingian kings between 450 and 650. But texts come with a range of problems seperate from archaeological datasets. To map textual sources and compare them with the archaeology, it is important to be aware precisely what is being mapped and what problems are present behind the dataset.

Each record in the database consists of one attestation: a single piece of evidence (e.g. a few words, a line, or several lines) from a written source for a specific place that can be mapped in geographical space. With an archaeological excavation, we can usually pinpoint exactly where a spade entered the ground (especially with the help of modern GPS). In contrast, for written sources there is no direct relationship between the text and a location. Geospatial information can only be inferred from a toponym mentioned in a primary source (almost always in Latin). Philologists and historians have matched many ancient place names to modern ones with reasonable confidence, but the identification will always remain to some extent hypothetical. For this reason, attestations are kept strictly seperate from archaeological records in the Rural Riches database, although an attestation can be linked to the record of an archaeological site.

Attestations can come from all kind of written sources. Unfortunately, documentary sources for the Merovingian period are relatively rare, so we mainly rely on narrative texts, such as histories, saints’ lives or even poems.

Here is an example of an attestation, from Gregory of Tours’ Histories, 2.40:

“One day Sigibert went out of the city of Cologne and […] crossed the Rhine, for he wanted to walk in the forest of Buchau” (translation by Thorpe, p. 155).

Two locations are mentioned in this line for the whereabouts of ‘king’ Sigibert the Lame, providing us with two attestations (one for Cologne, one for ‘Buchau’). Next to place, the attestation also provides information on who (Sigibert), what (walking or hunting) and when (c. 509, from context).

The first attestation, civitas Colonia, refers (almost) certainly to the modern city of Cologne. In the second attestation, Sigibert is ‘walking’ (perhaps hunting) in the silva Buconia, but its modern location is less certain. We know the name otherwise only from later Carolingian sources, as a vast forest in Hesse (Germany). Is this the same forest mentioned by Gregory, and did it stretch all the way to eastern bank of the Rhine at Cologne, or did Sigibert travel much further into Germania? All this we can only speculate.

Identifying the toponym presents the first challenge, and we must hope that the editor has correctly transcribed the medieval manuscripts, and that the manuscripts faithfully copied the ‘original’ text. Even when we are reasonably sure about the toponym, we usually do not have precise geographic information. For example, in this case Gregory does not tell us where in Cologne Sigibert was. Perhaps Gregory might even have used Cologne as the name for the whole district.

Topographic logic of the text

Archaeologists know that there are problems and gaps behind a distribution map of material culture; formation processes and excavation techniques can skew the archaeological dataset. The same is true for texts, where the surviving texts may represent only the tip of the iceberg. After all, only a fraction of what was written in the Merovingian period has survived the centuries.

On top of that, texts present a very partial picture, since the author wrote with a specific mindset, intent and for a specific audience. For example, Gregory’s narrative choices are informed by his rhetorical purpose of advancing the concept of a catholic Gaul united by the Merovingian kings [1]. He also more frequently wrote about places that personally mattered to him, his family members and network of friends and readers. It follows that we should pay close attention to the social and historical context that shaped the topographic framework of our sources, which we could call the ‘topographic logic of the text’ (after Gabrielle Spiegel’s ‘social logic of the text’).

Using the database, it is possible to filter the recorded attestations by source. When we do a side by side comparison with the seventh-century Chronicle of Fredegar, a totally different distribution map appears. Fredegar’s narrative is more focused on the north and east of Gaul: the areas around Paris, Burgundy and Austrasia.

We can also zoom in on specific individuals. Using the database to plot all attestations of King Childebert’s II whereabouts, we can map his presence all over northern Gaul split by source. Gregory’s Histories (blue) give the widest distribution. His contemporary Venantius Fortunatus (green) gives a much more detailed picture of the Moselle and the Rhine valley, recorded in two poems describing a royal boat trip. Finally, the chance survival of three edicts by Childebert II as additions to the Lex Salica (pink) place the “Austrasian” king in the triangle Andernach-Cologne-Maastricht.

Without this fortuitous survival of Childebert’s decrees, we would not have had a single attestation of royal presence in sixth-century Maastricht!

What’s next: analysis and interpretation

The examples above show that textual sources give only a partial image. The scholar of Merovingian historical geography needs to carefully weigh the evidence and be aware of the possible gaps in the dataset. So what, then, can we learn from attestations? And how does textual evidence compare to the archaeology in our database? That will have to be the subject of another blog! Stay tuned for part 2.

[1] Following Breukelaar, A.H.B., 1994: Historiography and episcopal authority in sixth-century Gaul: the Histories of Gregory of Tours interpreed in their historical context, Göttingen, 207-225. 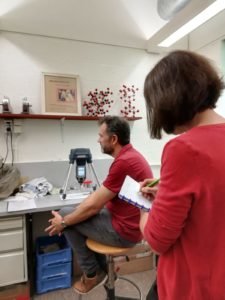 Pr. Fr Hartert from the geology department of Liège University performed PXRF analyses on slags from a merovingian settlement in Huy. These found with remains of glass production are slags due to the production of iron. Some traces are unusual for ores for the mosan region…research to be continued.

Part of the Rural Riches subproject on early medieval production involves the study of pottery. Our post-doc researcher Line van Wersch and research master student Sophie Vullings are currently in the research laboratory at the University of Liège to do macroscopic analyses on Merovingian pottery from production sites in the town of Huy. 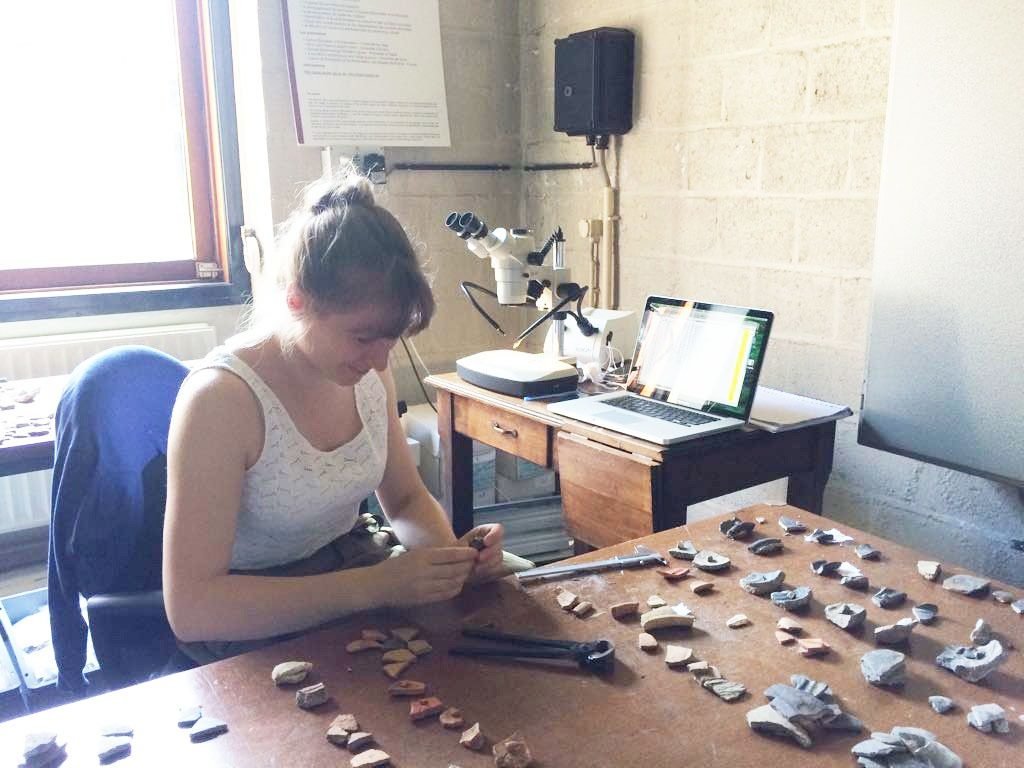 This website is hosted by the Rural Riches Project at Leiden University (the Netherlands).

It is a platform on the archaeology of the Merovingian Period.

Information will be provided on ongoing research projects, new finds and excavations and datasets will be presented. You are invited to write contributions about your activities on this blog. If you want to get in touch, please use the contact form.